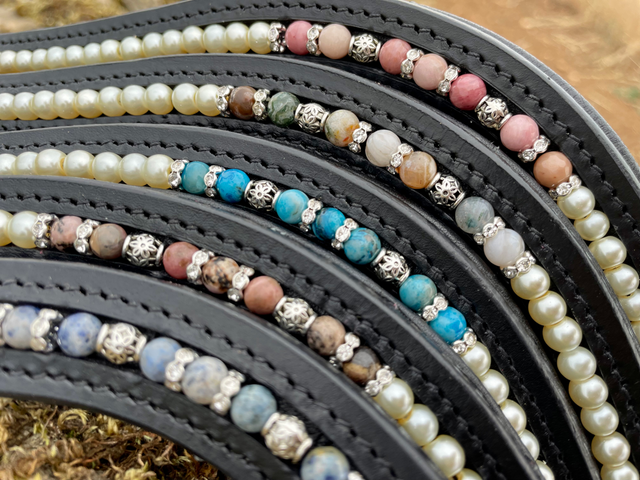 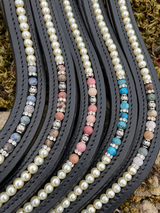 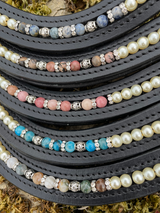 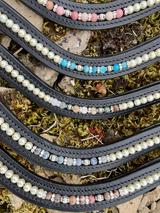 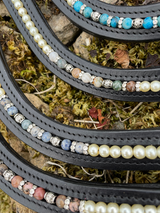 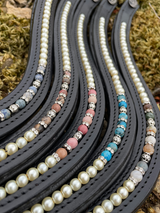 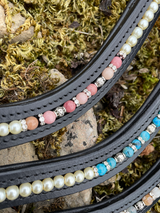 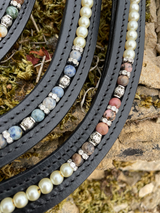 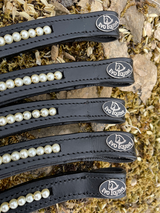 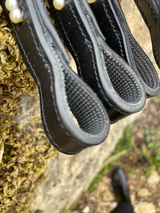 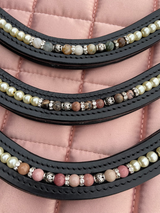 SKU:
£59.00
£59.00
Unavailable
per item
Bringing to you the most beautiful browband line that oozes quality and beauty. Each browband is hand stiched by us in the UK with the stones of your choice.
We can change the contrasting beads to suit your preferences and taste. We have shown cream beads in our photos but other colours look just as stunning. The natural stone line hosts a range of natural healing and energy quality’s used in humans to just beautifully stunning. Each one brings their Unique character and charm as they are made by nature. No two browbands will be the same.
This is a perfect gift for a friend as well as for yourself. If you would like us two use a different bead colour than cream please advise at checkout in the comments box or cream beads will be used.
Some useful Information about the stones:
Energy bead. Larimar (also Lorimar) is a rare blue variety of pectolite found only in the Dominican Republic. Its colourations vary from white light-blue green-blue to deep blue.
Cream: Bamboo Leaf Jasper is multicoloured with markings that range in earth tones, from pinks to browns, reds, creams and dark grey or black. Bamboo Leaf Jasper is a combination of sandstone structures within the Jasper. Its patterns arise during the consolidation process forming flow and depositional patterns in the original silica rich sediment or volcanic ash.The swirling patterns of Bamboo Leaf Jasper is thought to evoke a deep sense of peace and grounding.

Sunstone is a type of feldspar exhibiting in certain directions a brilliant spangled appearance, due to reflections from enclosures of red hematite, in the form of minute scales. Because of this beautiful affect Sunstone is a popular ornamental stone.

Blue. Crazy Lace Agate is a banded microcrystalline Quartz infused with Aluminum and Iron. It usually has complex patterns and bright colours, producing swirls of golds, greys, blacks, browns and even the occasional reds and pinks. Also known as Mexican Agate, Crazy Lace Agate is quite young compared to other minerals that can be found on Earth as it is believed to have been created some 65 to 90 million years ago. Crazy Lace Agate has patterns that resemble woven lace, which is thought to be very useful when it comes to weaving protections around it and bestowing these protections to whoever wears it.

Pink Rhodonite is well known for its beautiful pink colour. Rhodonite often has black Manganese oxide veins running through, giving it the distinct appearance of pink with black crisscrossing lines and flower-like formations throughout. These are the forms most commonly used as Gemstones, especially in beads and ornamental objects.

Blue Dumortierite: Dumortierite is a mirror blue Gemstone and is named after the French paleontologist, Dumortier. Its most common colour is blue or greyish-blue, though pink and purple colours are also known. Dumortierite's durability, combined with a high hardness, makes this an ideal Gemstone for jewellery making and deposits have been found in Madagascar, Namibia, Sri Lanka, Canada, Poland, France, Brazil and the USA.

Purple : Lepidolite belongs to the mica group of materials. It was first discovered in the 18th century, when it was called Lilalite because of its lavender colour. Lepidolite ranges from pink to purple in colour and it can be pale pink or a more striking purplish or reddish-pink. It is also sometimes light grey, yellow or colourless.

Please Note: Natural gemstone or semi precious stone comes from mineral. Due to the naturality, the stones may have different colour effects and patterns due to them not being man made. This browband is handmade to order and will take up to two weeks to make. The order is not refundable unless faulty as it is a custom made order.